Get to Know Chris Martin 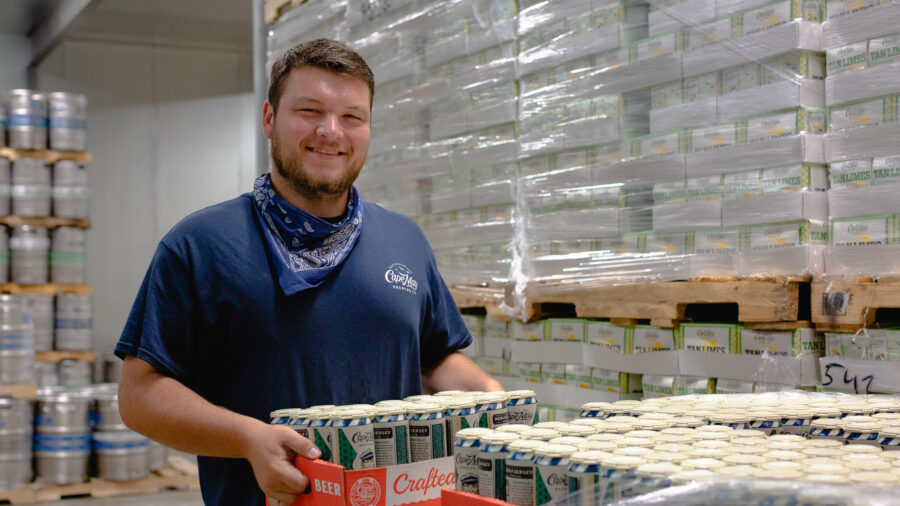 Faithful followers know that we love to write blogs on our new hires — it’s a great way to welcome new people to the Brew Crew and introduce them to you folks.

However, it’s really rare for us to go back and write a new blog for an old hire. But… when you hire someone at 21 and they stick around for four years, it’s safe to say that much has changed.

That is certainly the case with Cape Beverage’s Head Driver, Chris Martin.

“Chris is still the Chris we’ve all grown to know and love,” says Cape Beverage Operations Director Justin Vitti, “but over the past four years he’s become more polished and put together, growing as a person and as a member of our team. He’s proven to be reliable, hardworking, and is one of the best team players at Cape Beverage. He’s grown into a true leader, the key to our success at Cape Beverage.”

So, get to know Chris Martin… all over again!

A lot about Chris hasn’t changed: he was still born and raised in Egg Harbor Township, he still went to ACIT for Culinary Arts and Hospitality, Travel, and Tourism. But, this time around, he let us in on a little tidbit about his time at ACIT.

“I won Best Chef of my grade,” he tells us, audibly capitalizing “best chef”. “And look at me now.”

At ACIT, the culinary students run a small cafe out of the school, and Chris’s instructors got together and decided that he was the best in the class that year.

“I guess it was my dedication to my craft that won it for me.”

He still loves to cook but doesn’t do so professionally.

“I send Andrea a lot of snaps,” he says. “I just got into The Bob’s Burgers Burger Book, recently. So far the best one is the Hit Me with Your Best Shallot Burger. It’s super delicious. I love shallots. Anyone who prefers onions over shallots is stupid.”

After high school, he worked at Northfield Public Works and at Sears.

At Sears, he was in the Pickup and Receiving department, unloading trucks and assisting customers in picking up larger items.

He’d been drinking Cape May Brewing Company beer “out in the wild” before he saw the job posting on our website, but it’s a little hazy as to when he had his first Cape May beer.

“I don’t remember specifically,” he says, “but it was probably either Coastal Evacuation or IPA. Actually, it was probably at Charlie’s, back when they were serving Coastal on draft.”

He’d heard through the grapevine that they were thinking about downsizing at his job, so he began looking around and saw that we were looking for a driver.

At the time, our distribution department consisted of Justin Vitti and two other drivers, including our current Draft Technician, Andrew Monastra.

“And we covered about half the state at the time,” he says. “We didn’t really have specific days when we would visit the same accounts. It was kinda like, wherever it worked, it worked.”

At the time, our accounts were spaced farther apart, and we’ve since brought on distribution software that makes drawing routes much easier.

“Sometimes, it’d be a half-hour between each stop,” Chris says, “whereas now, we pretty much have a decent saturation throughout the state, so each of the guys has their own regular routes. Everyone has their own designated area that they service, which I feel makes a better rapport with our customers.”

These days, Chris and the other ten drivers more or less know where they’re going each day. There’s a lot of variation within those routes, but there’s a lot more known than unknown for our Distribution Specialists these days.

“It’s really nice to be able to see the same people and have them recognize you,” Chris says. “It builds trust.”

And that’s one of the things Chris likes about the job: while he generally sees the same people, no two days are ever the same.

“I’m doing the same job every day — even if I’m going to most of the same places — every day, I might get a random account that I haven’t been to in a month or two. It’s always in flux. That keeps things interesting.”

For the most part, Chris has been all throughout the state, getting to know more or less all of our accounts.

“Because I’ve been here the longest,” he says, “if I don’t know all of the accounts in an area, I know at least most of them. So, if someone takes off, I’ll be the one covering their route because I’ll know most of the stops. But, yeah, most of the state. That’s what four years gets ya.”

Our accounts tend to remember Chris, too, even if he hasn’t been there in a few months. Here’s the thing about Chris: he knows everyone. Literally everyone. If you’re in the beer business or work at a bar or own a brewery of your own, odds are that you’ve met Chris at some point. Most of that is because of his job, but there’s quite a bit of… erm… networking…? that he’s done on his own.

That’s a nice way of saying that he goes to a lot of bars and breweries.

“It’s because I’m one personable person,” he laughs. “I’m gregarious. Yeah, let’s go with that. I’m not afraid to strike up a conversation.

“And how could you forget this face?”

It certainly is a memorable babyface.

“For Christmas, I shaved my beard off for my mom, and I looked like an actual toddler.”

He enjoys the time alone in the truck with his music, as well. Chris has a notoriously broad taste in music.

“It’s all over the place,” he says. “Yesterday, for instance, I was listening to Queens of the Stone Age almost the entire day. But, sometimes, I listen to a variety of things, such as Kreayshawn, Britney Spears, A Day to Remember, All That Remains. Today, I was listening to my playlist ‘Ferda Feels’, which is all of my upbeat sad songs. They’re the best. Pop punk.”

One major change since the last time we wrote about Chris — other than the fact that his face has gotten significantly less babyface-esque — is that he no longer has his ‘86 El Camino, having run into some exceedingly bad luck and gone through five vehicles since then.

“Let’s see…,” he begins. “I had my Nissan D21 for a short time. I had my green Dodge Dakota that killed itself when the wheel fell off as I was driving it on the Parkway. There’s the cop car that I had for three weeks and hit a deer, again on the Parkway. And the truck that I have that I haven’t gotten on the road yet because coronavirus shut down the DMV and then a tree fell on it.”

Folks… this is our Head Driver. Thankfully, he’s a lot more careful with our trucks than he is with his own vehicles and his string of unfortunate events haven’t made the jump to our fleet.

However, as Head Driver, Chris has a few more responsibilities than the other guys.

“If any one of the drivers have any issues, they should call me before they call Justin,” he says. “They’ll call me about account problems, breakdowns, or just general inquiries. It also means that I have to make sure that we’re stocked on all of the truck essentials, like fluids, parts, and whatnot.”

Chris trains all of our Distribution Specialists, as well, having trained all of our current drivers.

In all, Chris has enjoyed his time here, mostly because it brings him into contact with a wide range of interesting people.

“When I go out to a bar sometimes, I’ll get recognized by one of the bartenders, and, once in a while, they’ll buy me a drink. Off the clock, of course.”

If you happen to run into Chris out in the world, be sure to say hello!