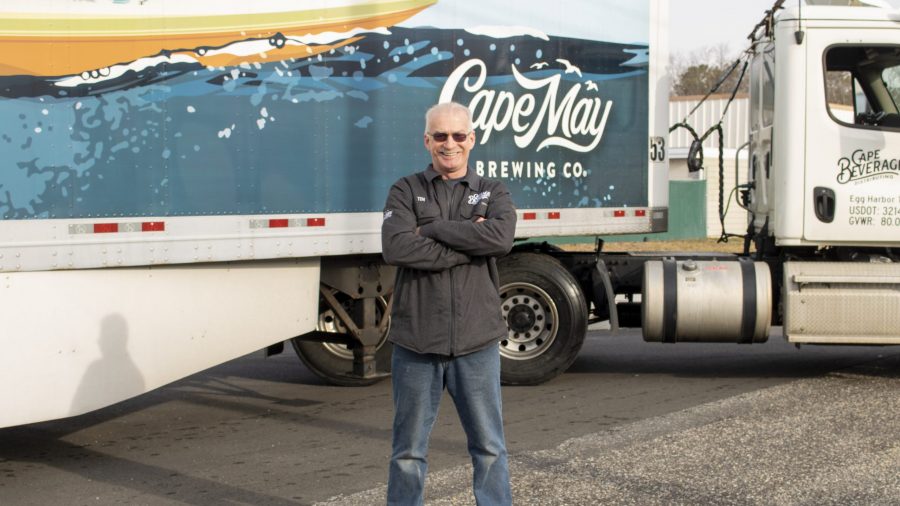 Never let it be said that experience isn’t important.

“On the morning of the interviews for our Class A driver,” says Cape Beverage Operations Manager Justin Vitti, “Tim shows up in his white Porsche, 15 minutes early, and with a resume of 30 years of tractor-trailer driving. He carried himself as a total pro, had a great positive attitude, and stressed how much being on time, being compliant, and being safe on the road matter to him. This mindset speaks to our Core Values: timeliness is so important when the warehouse team is waiting for a full load of cases to arrive and be unloaded into the warehouse so they can get them out into the field on time. Tim fits in very well with the team and even has the honor of sniping me out of the competition in last year’s laser tag battle.”

Tim grew up in New Gretna, New Jersey, and moved back there about ten years ago.

“That’s Bass River Township,” he says. “Exit 50. Everybody knows it by the exit, but it’s a small, little town.”

Tim worked for a delivery company for 28 years, beginning his career in package delivery before graduating to driving one of their tractor-trailers, moving packages from one distribution center to another.

In 2009, he moved to Riggins Oil, working there for about ten years, delivering diesel and gasoline for about two years, working the remaining eight years in the office, planning loads for distribution throughout the area.

Now, he’s happy to be back on the road.

“It’s a lot less stressful,” he laughs. “I was dealing with thirty drivers and all of the issues that go along there. Now, I just get in the truck and go.”

He’s charged with driving “Draftzilla”: our gigantic, man-we’ve-come-a-long-way, 18-wheeler. For the most part, he moves beer from Cape May to Egg Harbor Township, from the brewery to Cape Beverage, but, on occasion, he’s tasked with picking up beer from our contract brewers in Pennsylvania, from Pizza Boy out in Enola, and brings beer to our distributor in Delaware, Standard Distributing.

Tim was pretty lucky a few years ago when he got to leave his small, little town. He and his wife of 42 years, Michelle, were fortunate enough to travel to Russia.

“We started out in Moscow and ended up in St. Petersburg,” he recalls. “It was incredible. It wasn’t long before the pandemic; we were on a Viking River Cruise.”

Like many of us of a certain age, Tim grew up during the Cold War.

“I grew up, learning to fear Russia as a child,” he says. “But to actually go there to find out that those people are just like you and me. The people there were really very nice, very welcoming.”

However, Tim says that when they first arrived, it was a different story. Apparently, customs agents in Russia aren’t there to give you a warm welcome.

“Going through customs, that kinda made you feel a little off,” he says. “You’re traveling with your wife and you’re walking in line, and, ‘No! One at a time!’ It’s not like they’re there to greet you. ‘What is your purpose here?’ Our first thought was, ‘Uh oh. What did we get ourselves into?’”

“Every Friday night, they spend the night,” he says. “We give their parents a break and it gives us some time to spend with them.”

While Tim is, for the most part, retired, he needed to find something to occupy his time.

“The job here looked like a great opportunity,” he says. “It was exactly what I was looking for: something close to home, part-time.”

Tim is enjoying being a team member at Cape Beverage, finding it a little more laid back than some of his previous positions.

“It’s a nice environment,” he says. “Everyone wants to do their job, but they’re not so uptight about it that it puts unnecessary stress on everybody. Some of my previous jobs were very focused on production numbers — everybody wants to do a good job, but sometimes they got carried away with it.”

Thus far, he really enjoys working with the team at Cape Beverage.

And he really enjoys Apple Bomb.

“It’s just got that hint of apple,” he says.

If you happen to see Draftzilla out on the road, give a honk and a wave to Tim!