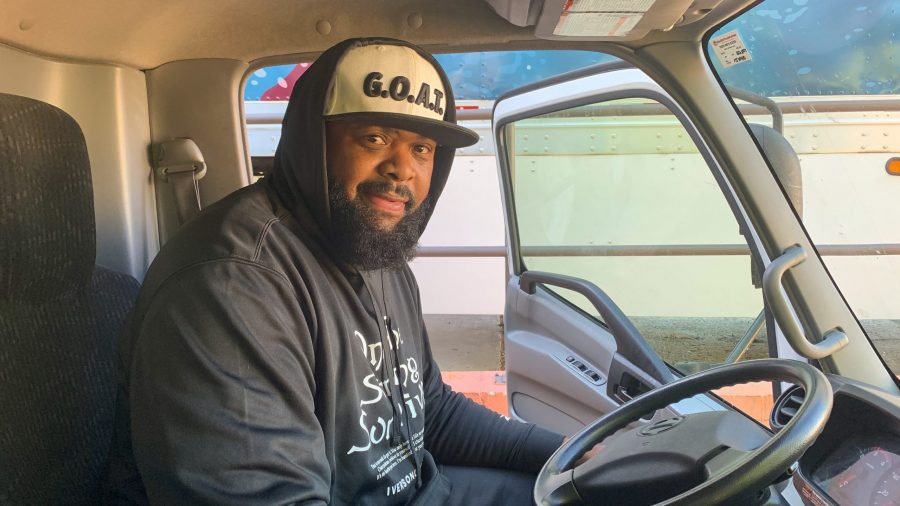 When a giant of a man comes in and wants to take a position lifting heavy things up and putting them back down, you find him that job. Period.

“Lenny brings with him the experience doing exactly what our job entails, from one of our area competitors,” says Operations Manager Justin Vitti. “He takes pride in everything he does including his work, joy in interacting with different people each day, and subtly brings a level of competitiveness that I hope rubs off on the rest of the team. Even if you’ve never met me, you know that I am a super competitive person and Lenny told me from day one that he was going to fight and prove that he should have the job over anyone else. So far, he hasn’t let us or me down.”

Originally from Atlantic City, Lenny’s family moved to Brooklyn when he was nine. He went to a few different high schools, including LaSalle Academy in Manhattan and Northern Valley Regional High School in Old Tappan, New Jersey.

In high school, Lenny was the top-ranked basketball player in the country, considered to be better than LeBron James, Carmelo Anthony, and Amar’e Stoudemire. He decided to forego college to enter the NBA draft directly out of high school, after being ineligible to play high school ball his senior year.

While Lenny went undrafted, he went on to play semi-pro ball for a few years, including for the Camden Monarchs, before getting injured. Since then, he’s coached in the area, including under Gene Allen at Atlantic City High School and under Anthony Farmer at Middle Township.

Now, Lenny is the subject of a documentary chronicling his high school career, has a book coming out soon, and does a fair amount of motivational speaking to students throughout the country. He admits that he made some mistakes as a 19-year-old phenom, and he doesn’t want to see the next Lenny Cooke make the same mistakes he did.

“I share my story with dos and don’ts to the next generation of student-athletes,” he says. “Most kids think that playing basketball is only playing the sport, but there’s a business aspect to it, too: having a clean image and doing the right thing in the public eye.”

Lenny is still a big fan of basketball, but, like many others, he notes that the sport has changed significantly since he was looking to be a part of the NBA.

“I grew up a Chicago Bulls fan,” he says, “so I still root for them and the Lakers, but I mostly root for players because the game has changed so much. It’s not as physical as it used to be. It’s more commercial now. It’s more about business and making money now, instead of people leaving it out on the floor day in and day out.”

These days, alongside his wife Anita, Lenny devotes most of his time toward being the best father he can be to his seven children and step-children. His oldest son, Anahijae, is in college in California, his 17-year-old daughter Heavyn is in Maryland, daughter Nyvaeh just turned seven, and twin boys, King and Prince, are three-years-old. Along with stepsons Tamir Rex, twelve, and Namir Rex, eight, Lenny says that it’s his kids that keep him motivated.

“That’s what gets me going every morning,” he says, “just knowing that, as long as I can put a smile on my kids’ faces, I’m happy.”

Speaking with Lenny, it’s apparent that he’s got a soft spot in his heart for kids, whether it’s his own kids or yours.

“When I’m doing my motivational speaking,” he says, “I don’t care if it’s ten, twenty, thirty years from now, if there’s one kid out of a million that I’ve spoken to, if I get through to one kid, I did my job.”

He comes to Cape Beverage after having worked for another South Jersey distributor. After his career in basketball, delivering beer was one of the first jobs Lenny ever had, and he truly enjoys it. So when he saw the opening at Cape Beverage, he didn’t hesitate to apply.

“I’m a people person,” he says. “I get along with customers; I like meeting new people. I can be in the streets and somebody might be like, ‘Oh, that’s Lenny Cooke!’ or whatever, but I take pride in my job. I was one of the best at my previous job — they always complimented me on my work — and it just transferred over to Cape Beverage. I like doing it. I like being out on the road.”

But a lifetime spent being a fierce competitor hasn’t simply fallen by the wayside for Lenny: he continues to look at his job as a competition.

“When I leave, I always try to be the first one back,” he says. “I got my job done, I went out, I don’t care where I’m located, I’m gonna be done before everybody else. And it looks good on me to the people in the front office.”

He’s looking forward to growing with the company.

“I’m gonna show my dedication and that I’m a hard worker,” he says. “I just want to have the same opportunities everyone else has, to move up within the company.”

And he’s loving his time at Cape Beverage thus far.

“The people are kind, generous,” he says. “I get along with all of my teammates. We’ve got great relationships when we’re at the site in Egg Harbor Township. We have good times when we’ve got some downtime. We’ve got a great group of guys and we get the product out.”

Lenny is definitely enjoying what’s left of The Bog.

“I like that cranberry flavor. It’s a great cranberry taste that you can mix with a little vodka,” he laughs.

While Lenny has lived a more interesting life than just about anyone we’ve ever covered, it’s obvious to us that he hasn’t let the choices he made as a younger man affect who he’s become. He loves his life, he loves his work, he loves his kids, and he’s back in South Jersey for the long haul.

We’re proud to have Lenny Cooke on our team.

Be sure to say hello when you see him in the field!