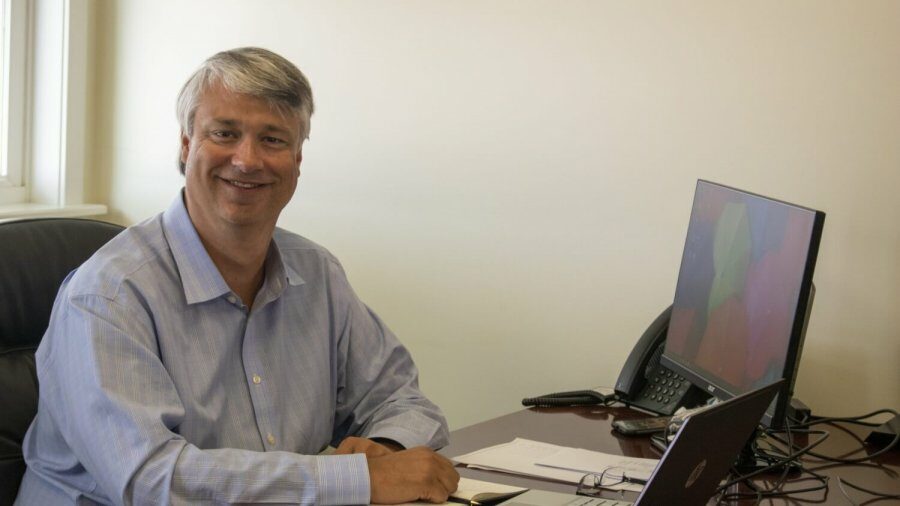 We’ve been looking for a CFO for nearly two years. It’s an integral position, and we really wanted to ensure that we’d found the right person.

A few weeks ago, we welcomed Frank to the team.

“We’ve been trying to fill this role for a long time,” Ryan says, “and we’ve been very picky. We had a clear set of criteria, and Frank fit them all perfectly. We’re at a unique position in our growth, so we were looking for someone who had the experience and the understanding of how we could continue to grow.

“His attitude is amazing. He’s got a great personality — he’s not a closed-door kinda guy. He’s personable, outgoing, smart, and articulate. We interviewed a ton of candidates, and no one matched his charisma, skill set, and experience.

“It was also important to us to find someone as passionate about Cape May County as we are, and Frank really loves the area. He fits right in.”

“I started off, probably a town over from Mop Man, in Briarcliff,” he tells us. “Then I moved to Broomall, where I went to high school.”

Frank did his undergrad at Drexel University in Mechanical Engineering, eventually working in engineering at a few companies throughout Pennsylvania and New Jersey.

“I have a patent in injection blow-molding equipment,” he tells us, something that will have absolutely no bearing on his job with us. “The product we made was sold into Bath and Body Works, where they put all of the gels and the hand soaps. I had a bottle in there for about ten years.”

While he enjoyed the work and was obviously good at it, Frank realized that he’d never be as passionate about it as many of the engineers with whom he worked.

“I realized that I really liked the financial side, the money side, the management side, the scheduling — the operations of it,” he says. “So, I was given the opportunity to run projects because most engineers are not very good at timing or at money. ‘I need more time and I need more money.’”

So, while in Colorado setting up a location for one of his previous companies, he decided to get an MBA in Finance and Accounting at Regis University.

“Regis is like St. Joe’s or Villanova out in Colorado,” Frank says, explaining his choice of school for his MBA. “We started up a location out there, I was able to move out there without having a major issue.”

Frank has a lot of experience with beverage companies, having spent four years with Multi-Flow Industries, a manufacturer and distributor of juices, soda, and beer systems to bars, restaurants, and institutional care centers, and nearly a year with Atlantic Beverage, an oddly-named spice importer and distributor.

“Cape May Brewing Company is very similar in nature to Multi-Flow,” he explains. “You have small-lot production — our biggest batches were 5,000 gallons, which would be about 161 barrels of beer. But we had our own labs, we had our own food technologists. We created our own products.”

Multi-Flow did a lot of the same types of things that we do at Cape May Brewing Company, testing for mouthfeel and flavor.

“I believe that my experiences were very, very similar,” he says, “even though it wasn’t in craft beer.”

In fact, Frank knows several of our suppliers, as well.

“We went to get nitrogen for the growler filler, and the two guys we got quotes from, I knew the owners of both of those companies,” he laughs. “I think it’s odd: I know a lot of the people already. It’s a lot of the same equipment, it’s just a different application.”

Frank also understands distribution — in fact, as this blog is being written, he’s out on a ridealong with our Distribution Specialist Anthony Hindsley to get a feel for how we do things.

“We had over a hundred vehicles,” he says. “We did DSD — Direct Store Delivery. Here, we only do distribution, but part of what we did was delivering to bars and restaurants.”

When Frank arrived at Multi-Flow, they were approximately our size, but, with Frank’s help, they grew to a $40M company distributing to thirteen states.

“That’s one of the reasons you brought me in,” Frank laughs. “It’s because I have done it. I also understand the scaling and the payroll and ESOPs and all the different financial acumen of dealing with different banks.”

We try to carry very little debt here at Cape May Brewing Company, but he actually has a lot of experience with our bank, as well.

“I’ve borrowed tens of millions of dollars from them in the past,” he says. “I deal with their board member, so I gave him a call and he introduced me to the junior level employee that I’d be dealing with. We’re not on the board-member level yet. But I hope to be!”

Growing Multi-Flow from a small company like us into a $40M business gave Frank a bird’s-eye view into managing the financials for a company with a high growth rate.

“It takes someone who’s comfortable doing very high growth rates to understand what’s going to keep the overall margin differences that are going to be needed,” he says, “as well as the issues that you have growing. Growth pains. I’ve been through the growth pains multiple times.”

So, when the opportunity with Cape May Brewing Company presented itself, Frank was definitely interested.

“I love the opportunity with a company that has this extreme growth potential,” he says. “Not just potential, but has been going through it in actuality over the past few years. I’d love to take my experience and help Cape May Brewing Company grow in the way that I have in the past, multifold.”

Growth is great, but it’s not easy to manage. That statement may seem trite or even condescending coming from the largest independent brewery in New Jersey, but it’s true.

“We’re to the point now where we have to make some bigger business decisions,” he says. “Those bigger decisions could cost more money and set us up for continued growth.”

But, mostly, Frank liked the opportunity to come back to the Jersey shore.

“I’ve been wanting to move back down to the Ocean City for years,” he says.

Frank began coming to Ocean City in ‘75 and had a house there years ago, but, once his family began to grow, it made sense to sell it.

“When they were babies, they just wouldn’t sleep at the shore,” he says. “So I kept driving from Ocean City all the way back to the Budd Lake/Mount Olive area up in Morris County so they could sleep. It’s not close.”

“The opportunity to come back is fantastic,” he says. “I have something overlooking the ocean now, and the kids love it. They’ve run into friends who have places down the shore, so… so far so good.”

Frank’s wife Nancy had been a partner in a big-four accounting firm for several years, but when the opportunity presented itself to work for a smaller firm, she negotiated that she’d work from home. So, while Frank and Nancy didn’t think that they’d get back to Ocean City until retirement, they are definitely enjoying the early move.

“Moving down here is a fantastic opportunity where we can all be happy,” he says. “I love the sense of being around people that are on vacation. People have a different vibe when they’re on vacation. I love to have that feeling year-round. I’d thought about retiring, but I’d end up living in the same place that I am now. That’s the best part of all of this: I’m where I want to be.”

As much as Frank loves Ocean City, he enjoys Cape May, as well.

“It reminds me of a quaint village,” he says.

Before his move to Ocean City, Frank and his family lived in Newtown, PA, an area with as much history as Cape May.

“We call it ‘Old Town Newtown’,” he says, “where there were houses built in the 1700s. That small, old town type of feel — Cape May reminds me of that.”

Having been in the area for most of his life, Frank is a big Philly sports fan.

“I’m a Philly guy,” he says. “All of the sports, but football is the primary one.”

Frank was a competitive basketball player years ago, with the ability to dunk when he was a freshman in high school, but the aspect of getting outside and being active is what really appealed to him.

“Not hiking nor rock climbing,” he says, “but playing sports.”

In addition, he’s coached football, basketball, and baseball, and his son is currently being recruited by D1 for baseball.

Frank has recently taken up biking, which is par for the course when you move to the Jersey shore.

“I just got my first road bike this weekend,” he says. “My wife did a hundred miles last year from Key Largo to Key West, and she just got a new bike. We’ve been out twice. On Sunday, we did 11 miles, and Monday we did 22. I will not be doing anything tonight. I’m spent. I was hurting last night.”

Frank has also been a CCD teacher for several years, the after-school education given to Catholic children who don’t attend Catholic elementary school.

His time spent coaching is applicable to his professional life, as well.

“I’m not coaching collegiate or professional athletes,” he says, “I’m coaching kids, some want to be there and some don’t, and that’s not much different than the office a lot of times. People want to be where they are at some places, and some people want to be somewhere else. You just need to know how to coach them to get what you need out of them.”

But, one of the most important jobs of a coach is to get a group of previously-unaffiliated people to think and act like a team.

“I see a lot of the cooperation of the staff at CMBC being along those same lines,” he says. “Everyone needs some coaching in certain areas to get better, and it might not be the same thing with everyone, but everybody can learn from a coach and grow. Just like here, we can learn from a business and grow together.”

And thus far, Frank has enjoyed his time at Cape May Brewing Company.

“I’ve been welcomed to a degree that I haven’t been in my career,” he says. “For example, all of my essentials were available to me before I started: the computer, the monitor, the phone. Business cards! I had business cards on my desk the day that I started! It’s not what normally happens.”

Frank has worked for companies of all sizes, from tens of millions to multi-billion-dollar size companies, and he hasn’t found anything like Cape May Brewing Company.

“The people have been extremely welcoming,” he says. “I know more about individual’s personal lives than I knew about people at companies that I’d been working at over five years. I know about their kids, their wives and husbands and what they do for work. It’s just an unbelievable sense of community within the company.”

But mostly, Frank’s been enjoying The Grove.

“It’s a refreshing summer beverage. I’m not a double IPA, hoppy guy — it’s just not what I prefer. If I want ABV, I’ll drink a whiskey,” he says. “My first week, I took a variety pack of ten different Cape May beers, and tried ‘em. We did a taste test with some friends, and everyone loved The Grove.”

We’re thrilled to have Frank as part of our team, and we’re looking forward to him helping us through our growth. Should you run into Frank in the Tasting Room or in Ocean City, be sure to say hello!