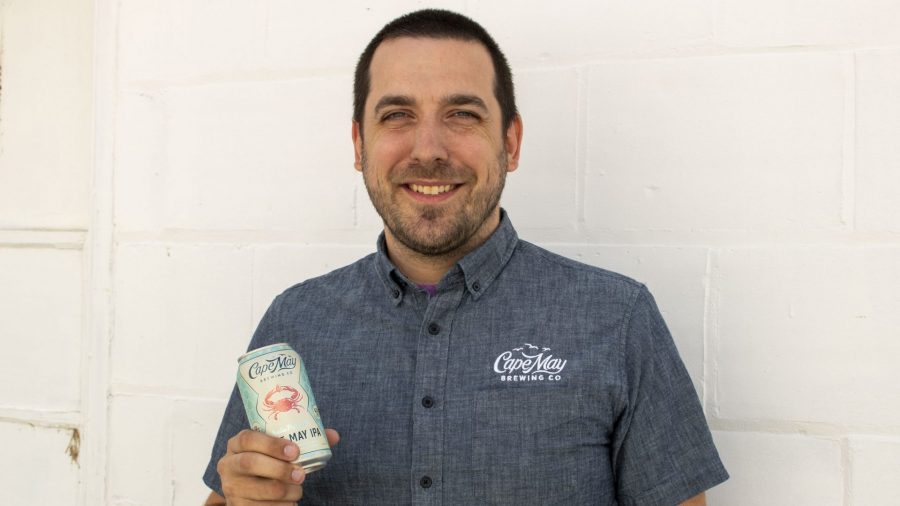 As we expand throughout the state of New Jersey, distributing in the final counties to bring our count to a full twenty-one, we needed to find someone who knows the area well.

“Eric comes to us with a wealth of experience,” says our Director of Sales Bill Zaninelli, “having already worked for two competing distributors in New Jersey. He knows craft — his depth of knowledge is staggering — and he’s thrilled to open new territories for us. He’s a fan of Cape May’s liquid and branding and thinks there’s a huge amount of potential in his territory.

“Plus, he’s just a little bit crazy, so he fits our culture well.”

Originally from Byram, up in Sussex County —

“It’s up near Stanhope, Netcong, Sparta,” he says. “You kinda have to name four or five places it’s near.”

And we still didn’t know.

“Hopatcong? Hackettstown? Waterloo Village was right down the street. They used to do concerts there. Lollapalooza. Phish played there once! It holds like 15,000 people and 40,000 showed up for it. People were all over the neighborhood.”

Eric went to Lenape Valley Regional High School, where his father still attends all of their football games.

After high school, Eric attended Ramapo College in Mahwah, graduating with a BS in Mathematics, intending to eventually become a teacher. However, even with best-laid plans, sometimes our ideas change. So, Eric began working as a merchandiser for a beer distributor while he was still at Ramapo.

Regardless, three years later, he was their “craft beer guy”, helping the whole staff get Cicerone certified. He was there for ten years before the company was bought out, eventually moving onto another distributor before joining us at Cape Beverage.

In his previous life, he’d tried his hand at homebrewing.

“Once?” he asks himself. “Twice. I had to dump the first one and the second one… I’m sure I still have bottles somewhere. It was fine. It was just a brown ale that I think everyone starts off with.”

He’s been trying to get back into it for the past ten years.

“Now that I have space in the basement, I probably can.”

Eric considers himself a Redskins fan — growing up, his brother was a Giants fan and they needed something to fight over — and a “lapsed” Yankees fan.

“Ever since they took steroids out of the game, it’s not as fun,” he jokes.

And his musical tastes haven’t really grown beyond high school.

“My musical tastes stopped evolving in about 2001,” he says. “I graduated in 2000, and 90s music is kinda when I stopped seeking out new music.”

He admits to still being fans of the likes of Soundgarden, Nirvana, Pearl Jam, and Alice in Chains, but his wife says he also likes “sad kid music.”

“Acoustic, singer/songwriter stuff,” he says. “I played guitar for a long time, so I wanted to expose myself to everything that I could. Now… I’ve exposed myself to enough. I’m done.”

A question we always ask is, “What makes you happy?” It usually gets people talking about what inspires them — what shines a light in them. Eric’s response was… unusual.

We should expect nothing less from a math major who currently sells beer. Nonetheless, he enjoys poker and craps.

“I deal part-time for a casino night company,” he says. “I have a friend that owns one, so he calls me when he needs a craps dealer.”

Even though we’re only a few miles south on the Parkway from Atlantic City, craps has always been a mystery to us, and it doesn’t sound like it’s too much clearer to Eric.

“My head spins,” he says. “In the casinos, they get a break every fifteen minutes, but we do two hours straight. There’s no stick man, so you have to do the stick and you have to do your side. So, my head’s spinning by the end of the night.

“And people don’t know the odds, so you just pay them whatever you feel like,” he jokes.

“I’ve really been getting into Bill Burr and Tom Segura,” he says. “We recently went to see Jim Jeffreys. We used to go to a lot of concerts, but now I go to a lot of comedy shows. I like places where I can sit down, now.”

He certainly gets a lot of sitting-down time in his car out on the road, and in his three-hour trip to the brewery. Nonetheless, he’s pleased to be a part of a growing company.

“It’s ready to explode,” he says, about his decision to join us here. He was suffering from burnout at his previous employer — with some 700 products, it’s not difficult. Eric was looking for something with a little more focus.

“I’d talked to Tom — I’d known him for a while — he’s the one who first told me about Cape May,” he says. “I’d known Mikepreviously; I’d known Joe previously. It felt like you were putting together an all-star team of salespeople.”

Eric not only points to the sales team as being strong, but he believes that everyone at the company is good at what they do.

Eric is our guy in the “far north”: he’s up in Sussex, northern Passaic, northern Morris, and northern Warren counties.

“I like that we’re opening new territories,” he says. “I get to design it and run it at the same time. It’s a lot of legwork in the beginning — opening all these accounts and getting everyone on board. But it’s nice to set it up and start from scratch and not have someone telling you exactly what you need to do and when you need to do it. I can do what I think makes sense and sell beer.”

Eric has been surprised at the reception of Cape May in the northernmost parts of New Jersey.

“It’s been way better than I thought, and I thought it was going to be good,” he says. “Every sampling that I do, I get twenty people coming up to me and saying, ‘Oh, I was just down at the brewery last week! We’re going down again in two weeks!’ Everyone connects to the product. Everyone’s familiar with Cape May, even if they’re not familiar with the brewery. It immediately triggers something with everyone.”

And he’s been loving it here so far.

“Everybody’s on the same page,” he says. “When you ask someone for help, they help you, which is mindboggling to me. Everyone works together and no one seems to know everything, but they know someone who does. There are people to delegate things to, and I think that’s great.”

Eric is definitely loving the access to Cape May Brewing Company beers.

“My year-round favorite is probably Coastal Evacuation,” he says. “It’s got a lot of body and flavor, but it’s not so overboard that it blows you out on one. I really liked Anniversary Ale 8, too. It was really big, and one is enough. It was everything packed into one.”

You may run into Eric out on the road up north. Be sure to say hello!