Phone
Menu
“I’ve wanted to work here since they opened their doors almost ten years ago.”
Our Crew 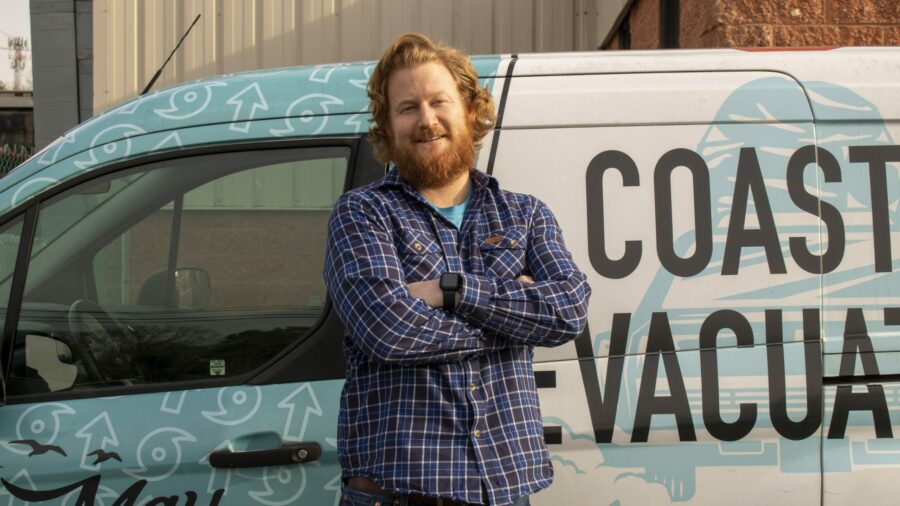 When you’re hiring a salesman to take over our longest-established territory — i.e. Cape May County — you’re looking for experience and a deep understanding of the area.

“Doug came to us with a ton of experience with some big names in craft beer,” says Director of Sales Bill Zaninelli. “He knows the market well, having covered Cape May County for Dietz & Watson. He’s a really smart guy.”

And, already, he’s performing well. Doug only spent a week or two learning the ropes before he began bringing on new accounts.

“He’s gotten Honey Porter and Two Versions of Me into The Mad Batter, one of the fantastic restaurants in Cape May, where we’d been trying to get a foothold for years,” Bill says. “He’s proving to be a great fit — getting along well with everyone, he’s a good fit personality-wise, and he fits right in with our culture.

“Plus, he’s a world-class fencer, so if anyone gives us any shit, we can send him out with his rapier to take care of things.”

Doug is originally from South Jersey.

“I grew up in… huh…,” he says, before explaining that his parents liked to move around every eight years or so. “I started off in Pennsauken, moved to Cinnaminson, Medford, but we’ve always had a summer house in North Cape May.”

Doug has a lot of family in the area, going back multiple generations, practically to the founding of Cape May.

“We were part of the people who founded it, a long time ago,” he says. “We still have a little commune on Lafayette Street — I think there are about five houses that my family still lives in.”

He graduated from Moorestown Friends School before attending Ohio State on a fencing scholarship.

“I had a lot of people recruiting me for fencing,” he explains. “I was nationally and internationally ranked.”

Apparently, Doug was involved in a lot of sports as he was growing up but broke his nose while playing football in the third grade.

“I was goofing around on the ice, playing football with my friends, and I broke my nose,” he says. “It was really bad. I needed surgery; it was that bad.”

It was going into basketball season, and he couldn’t play due to the broken nose. Not wanting to give up sports altogether, he found fencing.

“In Cinnaminson, there’s a little fencing club,” he says, “and, in fencing, you keep your face covered, so I thought that was a good fit.”

And, as it turns out, Doug had a knack for it.

“I was pretty good,” he says. “Pretty quick. That fencing club turned out to be one of the best in New Jersey and in the country. It wasn’t at the time — it was just a startup –, but it had me and a couple of other guys who were all internationally ranked after just a few years.”

Being internationally ranked, fencing took Doug all around the world, including trips to China and to Europe; however, in recent years, he’s loved adventuring throughout Nicaragua with his wife Ashley and their two toddlers, Walker and Willow.

“The first time my wife and I went down, we went volcano boarding, which was awesome,” he says.

<yet another record scratch>

“You hike up an active volcano — it could go off at any moment,” he says. “You hike up all these rocks, and it’s windy as hell, and you’re carrying this sled thing, and you put on these coveralls like a mechanic might wear and some goggles, and you sled down the hill through volcanic ash on this makeshift sled that they put aluminum foil on the bottom. You can get up to fifty, sixty miles an hour.”

Hm. So that’s a thing people do. Amazing.

“It’s awesome,” he says. “Then you drink many beers after.”

When in Nicaragua, he loves going ziplining, exploring the jungle, and surfing.

“But I don’t really surf anymore now that I’ve got two kids,” he says.

Doug is a fan of all the Philly sports teams, and, of course, Ohio State for football and basketball.

“It’s hard not to be an Ohio State fan,” he laughs, “because they’re so damn good all the time.”

When it comes to music, Doug says that he likes a lot of different types, “but I don’t love anything.” Regardless, he points to 80s and 90s grunge as well as reggae bands such as Slightly Stoopid and Pepper as being among his favorites.

“But Rage Against the Machine is always going to be my favorite,” he says. “I was really psyched about their tour this year, but, you know, things happen. But they’re my favorite band by far.”

When he’s not selling our beer and seltzer, he likes to be outdoors, hitting some of the smaller parks with his family.

“We have a few parks around our house with trails,” he explains, “so we love looking at the birds and trying to find turtles and all of that. We also live a few houses from a bike path, so I’m always there with the kids.”

While he was in college, Doug took an internship with Dietz & Watson, which eventually grew into a seven-year tenure with the company.

“I started as a route driver — I was pretty much a truck-driving salesman,” he explains. “I would take inventory, order my own things for my truck. That was in Cape May County, so I’m very familiar with the seasonality, gearing up for the summer and the lulls all winter and spring.”

Doug eventually worked his way up to the ShopRite team, in charge of sales to those stores throughout Delaware and Maryland.

“I was living in Brigantine at the time,” he says, “so I didn’t love that. It wasn’t ideal.”

Throughout this, Doug knew that he wanted to get into beer sales.

“I took a job managing a bar in the Tropicana,” he says, “basically to get into this industry. I was always very interested in craft beer: loved it. My goal there was to find somebody who I could grab their ear and let them know my sales experience.”

Turns out, he was able to grab the ear of a small, start-up brewery owner

“We chatted, and I was their first sales hire when they were ready,” he says. “I was with them for ten months, then another brewery made me an offer I couldn’t refuse, and I was there for another three years.”

However, it had always been Doug’s dream to work for Cape May Brewing Company.

“I’ve wanted to work here since they opened their doors almost ten years ago,” he says. “I was living in Town Bank at the time — not around the corner, but only a few miles away. While I was a salesman for Dietz & Watson, and I thought it would be really cool, since I love craft beer, to work for this brewery.”

There were few other breweries around back then, and we would be a few years away from needing a full-time salesperson.

“I was like, ‘Alright. Maybe when they get a little bigger, I can get a sales job here,’” he says. “Eventually — ten years later — I was able to make it happen.”

“Richie was the perfect hire,” he says. “He destroyed it down here. He’s killing it, still. I’m just happy he was able to get a promotion and I was able to slide in here. I was incredibly happy.”

Regardless, Doug is happy to be working in the town he loves.

“I love Cape May,” he says, “and how it’s completely different from any of the other beach towns in New Jersey. The winding, Victorian streets really set it apart. I love how it’s incredibly different. It offers so much: it’s more of a town than any other beach town.”

He’s looking forward to growing with the brewery.

“It’s wild because we’re on an upward path,” he says, “and, so far, I love everybody I work with. I’m looking forward to the relationships I’ve made and am going to make, and I’m really looking forward to selling a shitton of beer. And seltzer.”

Yet, to choose a favorite CMBC beer, Doug dug deep.

Yes, Coastal Evacuation was originally called Centennial IPA before we realized that having a beer with the same name as one of the most popular beers in the world was not going to turn out well, so we changed the name. And the recipe: still Centennial-forward, but now it’s a blend of hops instead of being a one-hop brew.

“But Coastal is my favorite beer to have at home,” he says, “but, if I’m out, it’s probably going to be Always Ready. I love Always Ready as well, but it’s lower in alcohol. Coastal’s a home beer for me, for sure.”

Doug is covering Cape May County for us, so, if you see him out in the field, be sure to say hello!