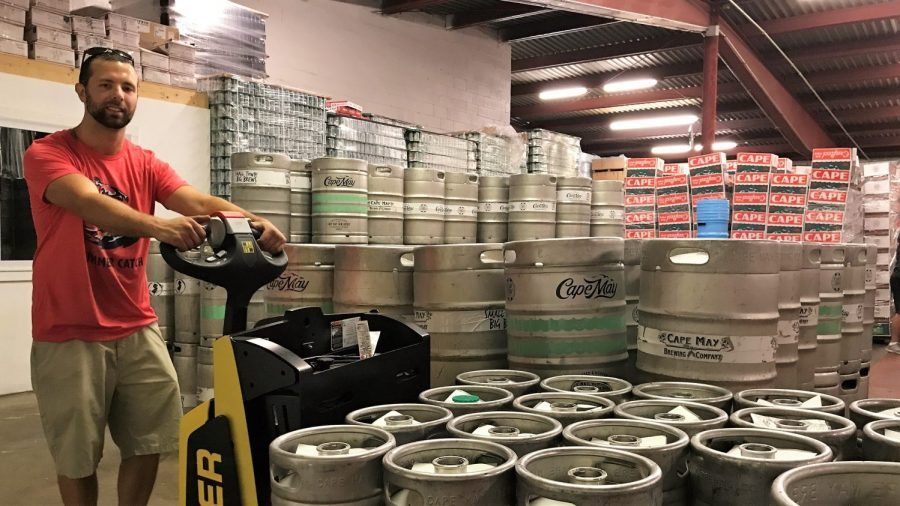 Over the past few months, we’ve brought in quite a few new drivers. With our sales team out there opening up new markets and signing on new accounts like nobody’s business, we’ve needed a phalanx of drivers to get all that beer out there into the world.

Linwood native Charlie Kleva is one of them.

A 2012 graduate of Mainland Regional, Charlie headed to Rowan University after high school for a major in Advertising and Marketing. He’s got two more classes to finish up before graduating in December.

“I gotta get out of there, though,” he says. “A little too stressful. It’s like the parents’ stress starts to rub off on you.”

Working at a brewery isn’t exactly low-stress, but, luckily, our product is a natural stress reliever.

An avid snowboarder, Charlie’s been hitting the slopes since he was ten years old. He admits to not having been to too many places yet — mainly day trips to the Poconos and a handful of trips to Vermont. Nonetheless, he’d eventually like to head out west to Utah sometime soon.

Once, on a high school trip to Killington, VT, his Junior year, he and a few buddies spent a little longer on the mountain than they should have and realized that the bus back to New Jersey had left without them.

Luckily, the bus was only about fifteen minutes away from the mountain: close enough for a relatively quick rescue, but just far enough away for Charlie and his buddies.

Honestly, though, getting left behind in Killington wasn’t all that horrible a prospect to young Charlie.

“It’s not a totally bad thing,” he said. “I thought, ‘I guess I live here, now. Just have to start anew. Grow a beard and hunt all my own food and become a nomad.’”

Nonetheless, an important lesson was learned:

Words to live by, Charlie. Our drivers never miss a delivery.

Aside from snowboarding, Charlie’s a fan of sci-fi pop culture, an avid video game player, and likes to work out. In fact, it was an interaction at the gym that led to Charlie getting the job at CMBC. He ran into our driver Chris Martin who mentioned that we were looking for drivers and thought it would be a perfect fit.

“I can’t really stay in one space for a prolonged amount of time,” he says. “I like to move around and be hands-on.”

He’s also a fan of “Frank Zappa, Pink Floyd, Tool. I like a lot of metal, like Animals as Leaders,” he says. “They’re crazy. Very complex. I like a lot of complex music. I’m not really into the top twenty or whatever the kids listen to these days.”

He’s looking forward to checking out the Exit Zero Jazz Festival in November — as the official beer sponsor, brewery employees are always anxious to check out the festival.

Even though he’s from the area, Charlie hasn’t really had the chance to explore Cape May.

“I’m not really too familiar with Cape May,” he says. “My commute is just jumping on the Parkway and hopping off at Exit 4, but I just learned that my cousin lives about three miles from the brewery, so I’ll get to visit her.”

Charlie is looking forward to his time at CMBC, and not only because it’s his first real, full-time job.

“It’s not really something that I’ve ever done before,” he says. “This is my first real job, in a sense. So, I think it’ll be interesting. And I’ve enjoyed a lot of the beers.”

He’s enjoying the job thus far. As someone who doesn’t want to spend his time sitting behind a desk, he’s enjoying life on the open road.

“I like to get around a lot and meet new people and see what there is to see around here,” he says. “And so far, driving around, I’ve gotten to see a lot of cool places like up in Monmouth, they’ve got some really cool aesthetics out there. It’s pretty cool. A lot of nice stuff.”

Charlie is looking forward to his time at CMBC and hopes to learn a lot while he’s here.

“I kind of want to expand,” he says, “definitely try to get more involved in the company itself. I like what I do now, but if I’m here long enough, I’d like to learn some different skills. Maybe shadow some of the brewers or try to work with the PR team. Try to become a jack-of-all-trades at some point.”

Right now, though, Charlie is enjoying it down at CMBC.

Welcome aboard, Charlie! We’re glad to have you as part of the team.