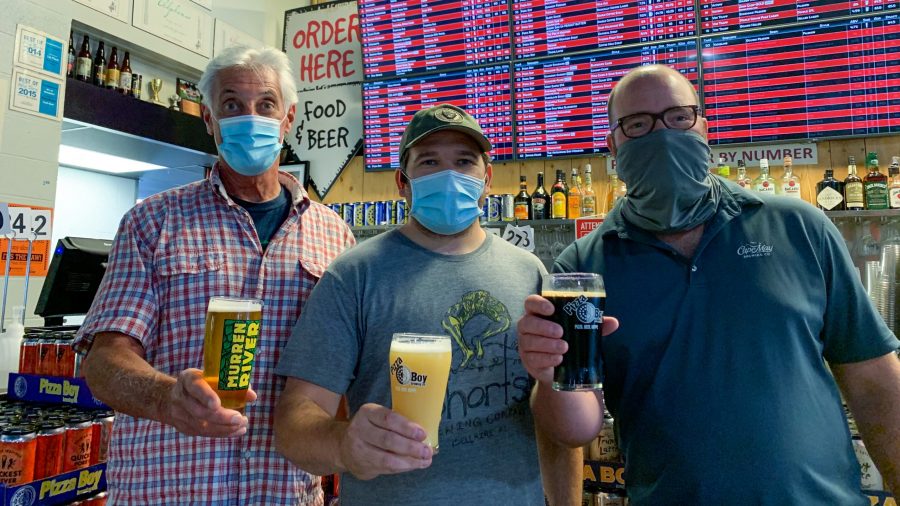 “Al [Kominski] and his team produce some outstanding beer,” says Cape Beverage CEO Ryan Krill. “With their methodical and well-managed growth model, they are completely focused on the quality of the liquid, which is something that we admire at Cape Beverage, aligning with our own values. As the worldwide COVID pandemic has shifted consumers’ needs toward consumption at home, Pizza Boy, like many other small brewers, are shifting their focus toward increased canning. With our reach throughout the state, I’m excited to help another brewer get their beer in the hands of fans in New Jersey.”

“Not only does Pizza Boy have an excellent reputation, but their beer backs it up,” he says. “Their primary focus is turning out a superior product, and it shows. They’ve done well both in the Philadelphia area as well as in the Pittsburgh area, and, with the strength of their IPAs, I expect them to do exceedingly well in New Jersey.

“Also, it doesn’t hurt that their pizza is out-of-this-world.”

Founded in 2002, Owner Al Kominski of Pizza Boy began serving beer in 2008, installing 24 taps, mostly out of necessity: there simply weren’t many establishments near the pizzeria selling beer. However, as demand at his establishment began to grow, Kominski decided to begin brewing his own, bringing in an automated BrauKon system in 2009.

It wasn’t until 2011 that Kominski felt that he’d perfected his brewing to the point where he was comfortable serving his beer to his customers, beginning with Murren River, a 100% Citra-hopped West Coast-style IPA with a blend of pilsner and pale malts.

In addition to Murren River IPA, Cape Beverage will be distributing Distinguished Indistinguishability New England-style IPA, brewed with pilsner, oats, caramel 15, dark Munich, and roasted oats, with Amarillo in the whirlpool and dry-hopped with equal amounts of Simcoe and Mosaic.

“It’s a great representation of the beers that we put out in that New England-style category,” Kominski says. “With notes of sappy pineapple, candied mango, ripe berries, and pine, the aroma and finish are incredible.”

Through the years, Pizza Boy has won numerous awards for its beers, including a silver in the Experimental Beer category at the 2014 World Beer Cup for Hoptart, a kettle sour conditioned on locally-harvested grapes, wet-hopped with Cascade. Pizza Boy’s coffee stout, Sunny Side Up, has garnered a World-Class, 97 rating at BeerAdvocate.

After brewing for nearly a decade, Kominski decided that it was the right time to begin distributing to New Jersey.

“Philadelphia has been a huge market for us,” Kominski says, “and we’ve been receiving numerous inquiries as to when we’d cross the river into New Jersey. As we’ve expanded our canning operations, the timing to move into New Jersey seemed right, and Cape Beverage seemed like an excellent fit. Like us, Cape Beverage began with a local focus. Furthermore, as the owner has direct brewery experience, he understands the supply side of beer distribution.”

Both Cape Beverage and Pizza Boy expect New Jersey beer drinkers to enjoy both Murren River and Distinguished Indistinguishability, with the expectation that they’ll recognize both the artistry and the craftsmanship that goes into each beer.

“My goal is to have the freshest beer we can have,” Kominski says. “At the end of the day, our concern is the quality and freshness of the beer. I hope that New Jersey beer drinkers appreciate that, as well as all of the hard work that goes into brewing it.”

ABOUT CAPE BEVERAGE: Founded in 2019, Cape Beverage delivers experience, dedication, knowledge, and brand focus to all 21 counties in New Jersey. Built on nine years of Cape May Brewing Company’s successful self-distribution, Cape Beverage’s team of committed and enthusiastic Sales Managers is constantly in the field, ensuring quality, friendly service to each retailer, supporting and engaging each bar, restaurant, and retail store with a successful sampling program led by a dedicated Sales Assistant and run by a team of knowledgeable, outgoing, and locally-based Brand Ambassadors, showcasing our brands throughout New Jersey.

ABOUT PIZZA BOY BREWING: What’s not to love? Great food, great beer, and a family-friendly atmosphere. The folks at Pizza Boy are proud of what they’ve built and they’re happy to be recognized as a world-class craft beer destination and an affordable, consistently delicious restaurant. Their production brewery is located inside their restaurant, Al’s of Hampden, in Enola, PA. With a 10,000 square-foot location and over 100 beers on tap, they’re central PA’s premier destination for craft beer.