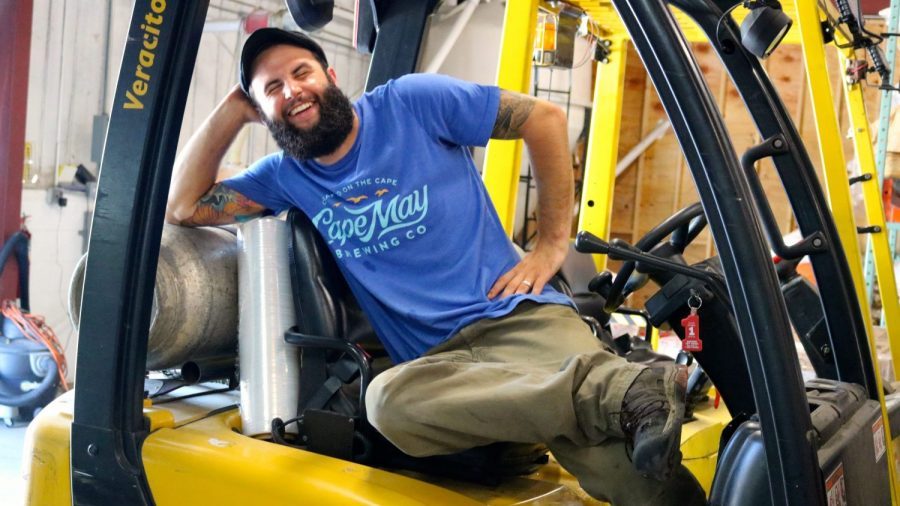 Some men are simply destined for Cape May Brewing Company.

Our new Warehouse Manager, Craig Tropp, is one of them. He’d been a fan of the brewery for years, and, when the job opened up, it didn’t take long to figure out that he’d be a perfect fit.

“Craig brings a set of critical thinking skills that are a necessity in navigating the heavy traffic of the warehouse,” says Distribution Manager Justin Vitti. “From our orders shipping out to our inventory coming in, mixed with the constant flow of raw material goods, being organized and being able to think on his feet is a must.”

Originally from Winslow Township, Craig’s explanation of where he’s from is all too familiar to those of us who grew up in the deep woods of South Jersey.

“Actually, the town I grew up in was Cedarbrook,” he says, “part of Winslow Township. You can also say ‘Blue Anchor’. They’re all about this big.”

He graduated from Winslow Township High School and sat down with us soon after his high school reunion.

Craig went to Camden County College then to Stockton College (now University). He was a Theater Production and Design major at Stockton, learning how to design lights, sets, and costumes.

“I did theatre since I was 12,” he says. “I was always a technician, though, because I can’t act. But all of my good friends were in theatre while I did the tech work, which is how I got to hang out with them. Then I turned it into a career.”

In addition to freelance design work, before CMBC, Craig worked at an event production company as a fabrication and event technician doing custom fabrications.

“Mostly woodwork at my first job out of college,” he says, “then when I went to Starlite — my second job — I was doing the same kind of thing. I was doing lighting, tech work, and lighting design. Then I moved into their fabrication shop and was doing metalwork — steel and woodworking. And a little warehouse managing.”

While he was at his last job, Craig married Amanda. Even though they’d known each other since high school, they got married up the street from the brewery at Cold Spring Village — and had kegs of Cape May IPA and Mop Water at the reception.

“It’s pretty damn good,” he says. “It’s my jam. If I wasn’t getting married on my wedding day, I probably would have gotten tuned up on Mop Water like everyone else did.”

For their honeymoon, Craig and Amanda went to Ireland for two weeks, driving throughout the country.

“It was pretty sweet,” he says. “We flew into Dublin, got the car, had to learn how to drive on the opposite side of the road. Amanda didn’t want to drive, which was cool. I had no problem.”

While in Ireland, they visited the Guinness brewery at St. James’s Gate. Their stout is one of Craig’s favorite beers, and he loved the chance to visit the homeland.

“The best part was the 360 Lounge,” he said. “The seventh floor is a glass circle. You get your beer, and you look over the whole city. You can see the mountain range in the background, it’s really cool. And on the glass, they have vinyl stickers that tell you what each spot is. It’s really cool.”

As you may have gathered, Craig is a huge beer lover. He and his friend Dorian have been homebrewing together a little.

Together, they’ve recently brewed a mango IPA that came out great.

When he’s not making beer, Craig is a huge fan of soccer — he’d even played in a league with our Sales Manager, Evan Kostka.

“Love soccer,” he says. “MLS, Philly Union fan. EPL, I just watch. I support the Union, even though they suck.”

Craig is a big fan of live music. Earlier this month, he attended the Levitate Music Festival in Marshfield, Massachusetts, where he got to see some of his favorite bands — The Suffers, Stick Figure, Stephen Marley, Rebelution, Turkuaz, and Slightly Stoopid — as well as make some new favorites.

“Levitate was wonderful,” he said. “It was two very distinct, different days, with a wide variety of music. The first day was all reggae and the second day was all jam madness. I got down with the funk. Some of the old bluegrass.”

He was particularly impressed with Greensky Bluegrass — he’d heard a lot about them before the festival but never had a chance to really give them a listen. Spafford, Twiddle, Lake Street Dive, and Trey Anastasio Band were also on the lineup for the weekend.

“But the big surprise was Ripe,” he said. “I never heard of them before, but I was down with the funk.”

Craig likes the funk in music as well as beer. Luckily, we have Crusty Barnacle coming out this week.

Craig and Amanda camped outside Plymouth for the festival, something they both enjoy. In fact, Craig’s spent a lot of time camping in the Cape May each summer, and he’s particularly enjoyed it.

Craig has long been an avid fan of the brewery, almost from the day we opened our doors. Amanda’s family, avid homebrewers themselves, first introduced him to craft beer by bringing him here. In fact, the decision to get married at Cold Spring Village was, at least in part, influenced by the fact that it’s right around the corner.

“I’ve been coming down here for a while, watching the company grow,” he says. “Seeing it expand — and I can say this definitely now that I’m working here — you know that it’s going to continue to grow. It’s exciting to see that after taking the chance and getting on board.”

Craig is looking forward to seeing how the position is going to change and grow in the coming years. As we expand our operations, his job — keeping everything in the warehouse organized and going where it needs to go — is only going to grow as we do.

“As needs expand, my job will probably change a little bit,” he says. “It’s interesting to see what’s going to happen. Plus, I like that I’m in between buildings. The production guys are stuck in the Production Facility, working all day. I get to deliver stuff to the Tasting Room and hang with the folks on the other side once in a while.”

And he’s loving the job thus far. The switch from theatre to brewing was a good one for him.

“It’s pretty sweet,” he says. “The culture is cool, and everybody’s been super friendly. It’s interesting from other jobs — a lot of the people here all went into different career paths, and we decided to change it up and come here. It’s cool that we have so many different backgrounds.”

And now you’re one of them, Craig.

Be sure to say hello to Craig when you see him in the Tasting Room — he’s there for a shiftie most days — and will probably be there more often when Mop Water comes out later this month.